Indios
Performance piece and long poem in voice of single indigenous woman. Based loosely on story and research of Medea. Has been performed once by Linda Hogan at Collected Works, selected reading. Looking for new Native women performers.

Power
Hogan's second novel, a haunting story of forces beyond the human world.
Solar Storms
A story of love and family and a quest to find a lost way of life. Winner of the Colorado Book Award for Fiction.
People of the Whale
A powerful story of a Vietnam veteran torn between his war experience and his Native American community.
Mean Spirit
Linda Hogan's first novel, a Pulitzer Prize finalist.

Dwellings
Essays on nature and the living, spiritual world.

Sightings – The Mysterious Journey of the Gray Whale
Hogan wrote the indigenous viewpoints and historical background on this whale, following them in the journey between Baja and the Bering Sea.

Excerpt of poem: See other side of page.

Writer in Residence for The Chickasaw Nation

Professor Emerita from the University of Colorado

Internationally recognized public reader, speaker, and writer in all genres.

In July, 2014, DARK. SWEET. New and Selected Poems, was published from Coffee House Press. Her other books are Indios (Wings Press, 2012) INDIOS is a long poem and also a one woman performance piece)ROUNDING THE HUMAN CORNERS (Coffee House Press, April 2008, Pulitzer nominee) and the well-regarded novel PEOPLE OF THE WHALE (Norton, August 2008). Works include novels MEAN SPIRIT, a winner of the Oklahoma Book Award, the Mountains and Plains Book Award, and a finalist for the Pulitzer Prize. This is a book about the oil book in Oklahoma, affecting numerous tribal nations SOLAR STORMS, a finalist for the International Impact Award, and and New York Times Notable Book of Year. POWER was also a finalist for the International Impact Award in Ireland. It was based on the killing of a Florida Panther, a most endangered species.

WW Norton published the fiction except for SOLAR STORMS
Poetry, THE BOOK OF MEDICINES was a finalist for the National Book Critics Circle Award and received The Colorado book Award.

Her poetry has received the Colorado Book Award, Oklahoma Book Award (Twice), Minnesota State Arts Board Grant, an American Book Award, and a prestigious Lannan Fellowship from the Lannan Foundation. In addition, she has received a National Endowment for the Arts Fellowship, a Guggenheim Fellowship and has received the Lifetime Achievement Award from the Native Writers Circle of the Americas, The Wordcraft Circle, and The Mountains and Plains Booksellers Association.

Hogan's most recent awards are the 2016 THOREAU PRIZE from PEN,

A 2018 Native Arts and Culture Award.  The LATimes and Riverside Lifetime

Her work is writing of literary quality that contains new Environmental and Indigenous Knowledge and Activisism. It illuminates a Native spirituality that has endured. It is  also included in numerous anthologies in literature as well in works on Nature, Science, the Environment, Religious Studies, and in Animal Studies.

Hogan's nonfiction includes a respected collection of essays; DWELLINGS: A SPIRITUAL HISTORY OF THE LIVING WORLD; and THE WOMAN WHO WATCHES OVER THE WORLD: A NATIVE MEMOIR. In addition, she has, with Brenda Peterson, written SIGHTINGS, THE MYSTERIOUS JOURNEY OF THE GRAY WHALE for National Geographic Books, and edited several anthologies on nature and spirituality. She wrote the script, EVERYTHING HAS A SPIRIT, a PBS documentary on American Indian Religious Freedom.

The newest nonfiction is THE RADIANT LIVES OF ANIMALS, from Beacon Press in 2020. In this same year Torrey House Press publilshed a beautiful new book of poems, A HISTORY OF Kindness..  Another book, with the title taken from her chapter on Traditional Indigenous Knowledge and animals is new and on Tradition Ecological Knowledge

coming out from Oxford University Press.


Hogan was inducted into the Chickasaw Nation Hall of Fame in 2007 for her contributions to indigenous literatures.

She edited a book of work from thirty years of Parabola essays on Native spirituality, The Inner Journey: Native Traditions, for Morning Light Press. This is a collection of essays on myth and tradition from Parabola Magazine. Her main interests as both writer and scholar are environmental issues, indigenous spiritual traditions and culture, and Southeastern tribal histories. She is currently on the Board of Advisors for Orion Magazine, and several organizations.

DARK. SWEET. NEW AND SELECTED POEMS is a collection of Hogan's work since the 1970's. It's publication contains selections from previous published works and shows her powerful growth as an indigenous writer, thinker, and environmentalist.


Hogan was involved for eighteen years with the Native Science Dialogues, and the new Native American Academy and for several years with the SEED Graduate Institute in Albuquerque. She presented a 90 minute program at the International Congress of the Parliament of World Religions in Melbourne, Australia, as well as participating on a panel on Tribal Sovereignty at the same Congress in December 2009.

She is in demand as both a lecturer and a reader of her own work, nationally and internationally. She continues to travel for literary readings and to participate in conferences.

Hogan's work was translated into all major languages by the U.S. Information Office.She was a keynote speaker in Spain at the Eco-criticism gathering in Alcala,’ at major universities in Taiwan, at the International Studies on Religion, Culture, and Nature in Amsterdam, at International EASLE (Literature and Environment), in Turkey, and was a plenary speaker at a 2013 conference in Taiwan on Migrants and Memory. More recently she gave the keynote at the ASLE conference in Moscow, Idaho, a reader and speaker in Podgorica, Montenegro at the International Writers Conference sponsored by the US embassy and Karver Bookstore, and at the recent Environmental Humanities conference in Perpignan, France.

In April 2014 Hogan was one of the writers adding to the 200 year record of the Andrews Long Term Research site in the forest near Corvallis, Oregon, a collaboration between scientists and artists which at this time continues to influence her writing.

Linda has worked with "at-risk" teens in various places, including the Chickasaw Children's Home. She teaches Creative Writing workshops for all ages, and continues to give readings and lectures.

A HISTORY OF KINDNESS:    New Collection of Poetry

THE RADIANT LIFE OF ANIMALS:

Living in Wildlife Corridor in Colorado

This morning
when the chill that rises up from the ground is warmed,
the snow is melted
where the small deer slept.
See how the bodies leave their mark.
The snow reveals their paths on the hillsides,
the white overcrossing pathways into the upper meadows
where water comes forth and streams begin.
With a new snow the unseen becomes seen.
Rivers begin this way.

At the deer dance last year,
after the clashing forces of human good and evil,
the men dressed in black,
the human women mourning for what was gone,
the evergreen sprigs carried in a circle
to show the return of spring.
That night, after everything human was resolved,
a young man, the chosen, became the deer.
In the white skin of its ancestors,
wearing the head of the deer
above the human head
with flowers in his antlers, he danced,
beautiful and tireless,
until he was more than human,
until he, too, was deer.

Of all those who were transformed into animals,
the travelers Circe turned into pigs,
the woman who became the bear,
the girl who always remained the child of wolves,
none of them wanted to go back
to being human. And I would do it, too, leave off being human
and become what it was that slept outside my door last night.

One evening I hid in the bush south of here
and watched at the place where they shed their antlers
and where the deer danced, it was true,
as my old grandmother said,
water came up from the ground
and I could hear them breathing at the crooked river.
The road there I know, I live here,
and always when I walk it
they are not quite sure of me,
looking back now and then to see that I am still
far enough away, their gray-brown bodies,
the scars of fences,
the fur never quite straight,
as if they'd just stepped into it. 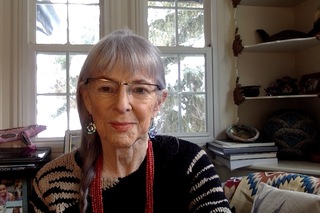